Sorry for the delay in the post, but life gets in the way! Don't worry, I had this written a few days ago, just no time to post. Here's my first official non-Oshkosh review (as the Fin 'n' Feather didn't count) and it was not good. 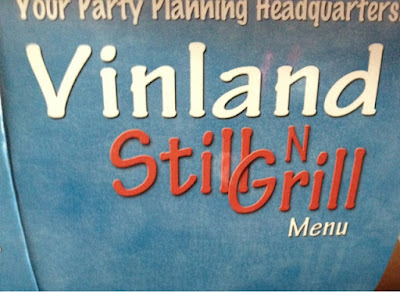 I arrived at Vinland Still N Grill on Monday evening at 6pm for a meeting. I had been in the joint twice before, but it had been a long time. I ordered the same-old-same-old brandy old fashioned sour. The bartender grabbed a glass and filled it with ice, followed by generous shot and half (almost 2 shots) of Aristocrat. She almost completely filled the rest of the glass with soda from the gun. She then placed a skewer of 2 olives on top. I was confused, had I really ordered the right drink, it had been a long day, so perhaps I misspoke? Nope, she then headed to the cooler and pulled out an unmarked bottle of pre-mix and added a splash on top. 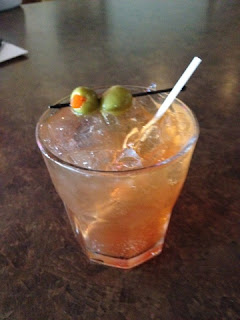 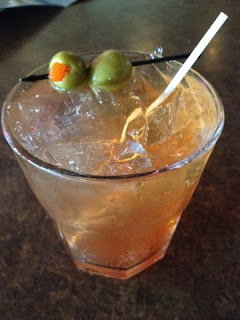 The drink was not good. It had almost no flavor and yet still very sweet. I think she may have gave me sweet instead of sour. The drink was $3.50, which was VERY expensive for what I got. There isn't much to review, since it wasn't that good. The only reason why I gave this place a higher rating was because it was very clean, bright and large inside, serves good food and has donated to the Oshkosh Jaycees. The place is worth a visit, but don't order an old fashioned.

Email ThisBlogThis!Share to TwitterShare to FacebookShare to Pinterest
Labels: 2 olives, mix, mystery, neenah, out of town