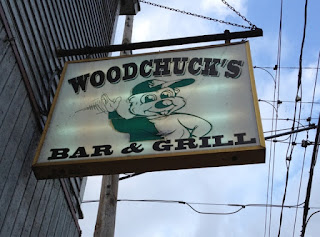 After writing my review of The Bar (link), I didn't think I would ever give a 1 olive rating-- after all, liquor is kind of like pizza: there is never really BAD pizza. Well, I was wrong... 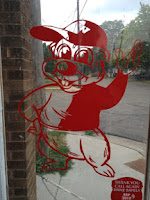 Townie Bar Night (click link for more info) has been on hiatus due to a busy spring and summer. Things have settled down and it has made it's triumphant return. We headed over to Woodchucks, which is nestled in a small neighborhood near the lake. The bar area is small, as is the side room, but cozy. There were a handful of people in the bar at 6pm on a Tuesday night. The bar only has a small wall-unit air conditioner, but lucky it wasn't blazing out.


I ordered a brandy old fashioned and before I could complete my sentence, the lady bartender asked "sweet or sour? olives or cherries? short or tall?" Hey! Sounds like she knows what she was doing. "Sour, olives, short" I ordered. As the bartender grabbed the glass, wait a second.. she added ice, 2 shots of Aristocratic brandy, a dash of cherry syrup (off-brand grenadine, which grenadine is really pomegranate - link), a dash of bitters and filled the rest of the glass with sour from a gun. The drink was just as bad as it sounds--in fact, worse, as it tasted watery. Despite being only $2.50, I could never order another one. I had a hard time drinking it. It was just a bad combination of flavors, no matter how much I stirred the drink up. Even with 2 shots of brandy in it, the drink didn't taste extra alcoholic either, just really off. 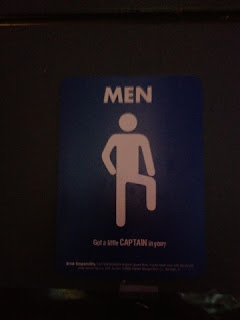 I would venture into Woodchucks again, just not for an old fashioned. The decor was typical Wisconsin bar with Brewers & Packers schedules and other posters. The people were friendly, although they seemed to question why 4 young women were in their quiet-borrow bar. This weekend they have Dueling Pianos from Lucelles of Milwaukee playing, which might be nice to check out if it isn't humid or hot, as the backroom was VERY warm when I ventured to look around.