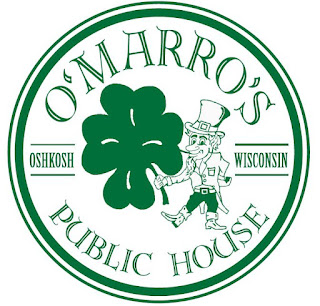 I had a meeting on Tuesday and I decided to get there a bit early to do a little blog reconnaissance. I got to O'Marro's Public House and saddled up to the bar. I have been here plenty of times, but have never ordered an old fashioned. They always have so many tasty beers and ciders on tap (and in the fridges) that are oh so tempting. Shawn, the owner, was manning the bar. Of course, he greeted me like an old friend. Who knows if he even knows my name, but the fact that Shawn is incredibly friendly and inviting to everyone he meets, make this joint such a great place to hang out.

I ordered a brandy old fashioned sour and was surprised by the next question, "You want that with a lemon?" "Uhh, sure" was my response. Of course, even though being at this bar several times, I sat in the wrong spot and couldn't see Shawn make my drink, except that there was a lot of muddling going on. I remember to take a picture of my drink before I took a taste, but in the chaos of my meeting, it was the only picture I took. Wah. 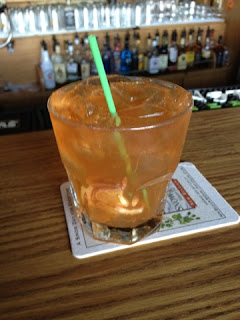 I didn't ask for a garnish, so I didn't get one. The drink sure was SOUR! I was caught off guard and quickly took another sip. Woahh.. I stirred that bad boy up. It was tart, strong and crisp. Shawn kept asking if the drink tasted OK, and I lied and told him it was fine, I didn't want to let on that this drink was questioning my taste buds. At this point in time, a friend showed up and we began discussing the drink. Finally I broke down and asked Shawn, what the hell is in this drink?? How did you make it? Shawn had no problem spelling it out to me:
Bitters
Lemon
Muddle -- It is important to muddle the rind, not so much the pulp.
Add a shot of brandy.
Re-muddle the brandy into the lemon rind.
Add ice.
Pour another shot on top.
Add the sour.

Ahhh! No sugar. That explains a ton. I began to drink from the glass and not out of the straw and that sure helped things progress. By this point, the drink really grew on me. I liked it, but didn't love it. When I had finished the drink, Shawn wanted to make me another and I let him, this time he made it pressed... but diet. Same regimen as before, yet instead of sour soda it was a spray of diet 7-up, diet coke and soda water. I REALLY liked this one. It's not your typical Wisconsin Old Fashioned, but it really was a nice alternative. I can't be positive what the cost of the drink was, but I would have to guess it was $3ish, as I had another drink (or 2) before I left the bar that night. (To my defense, I was at the bar for several hours and 2 meetings).

My high rating is due to the uniqueness of this Irish pub, the fair prices, the friendly bartenders, the gracious owner and the tasty drinks.