In my last entry regarding Arty’s Old Fashioned Sour - Made with Whiskey, I mentioned it being a perfect gift for out-of-state relatives and friends, I still stand by that; however, would I use it for a local gift? Probably not. I would rather take my friend out to a bar and socialize over drinks there, as nothing beats a Wisconsin tavern. If I were to have a party, depending on the amount of people, I may consider purchasing these bottles, but would probably prefer to make my own mix. With that said, I will probably continue to keep a few bottles on hand for novelty’s sake. I would also consider taking a pack on a vacation up north or as a house warming/hostess gift. 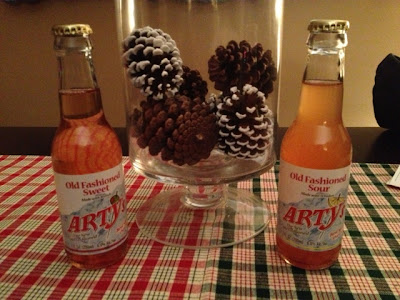 This time around, I tried the Old Fashioned Sweet with Brandy. It was several weeks after tasting the Sour version with whiskey. I did this for several reasons. First, I got caught up with all that is life including the holidays, work and a minor surgery in the family. Second, I try to review my drinks on a sober and fresh palate. Third, well, there is no third. 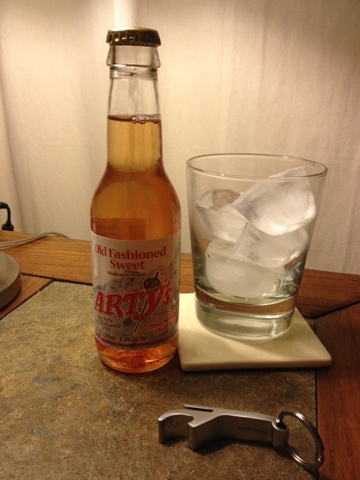 When pouring the small bottle into my glass of ice, the aroma of the signature bitters overwhelmed me, this was quite promising. My first sip was strong, just how I liked it. As I kept tasting the Old Fashioned Sweet, the flavor dwindled. I like that the drink is still light and fizzy, not heavy full of syrup. However, the bitters didn't seem so strong in this bottle. The drink lacks dimension found in a freshly hand-muddled version. Still, this drink far surpasses several old fashioneds I have previously reviewed here and went down quickly and smoothly. I didn't experience the same after taste as I did with the Sour version, which leaves me to believe that it was as I had thought, I might just not be used to drinking whiskey in that manner.

On first impression, I would probably stick with the whiskey sour version, as I recall it had more depth and more bitters, but would not hesitate finishing off the 6 pack of sweet. (Although, I will probably share). Overall, both were a pleasant experience and look forward to tasting more from Arty's. I can understand why their Facebook page is booming with requests (So Co versions, 12-packs, where to buy). I reached out to Arty's with a few questions for this blog and I was impressed by their almost-immediate response. Arty's plans on releasing a Whiskey Old Fashioned Sweet at the beginning of 2013 and per their Facebook page, later next year offer a Brandy Slush version. They also noted in the email that " Over the next 12 - 18 months we hope to roll out an additional 6 craft cocktails," however, they did not mention exactly what would be offered.


And for those keeping count:
Nutritional Facts for Wisconsin Brandy or Whiskey Old-Fashioned