A friend of mine on Facebook liked the "Arty's - The New/Old Fashioned" page and it got me curious. Arty’s was started in Clintonville, WI in 2010 and touts their drinks as handcrafted with quality process and natural ingredients. Arty's uses a special distilled spirits manufactured specifically for them. 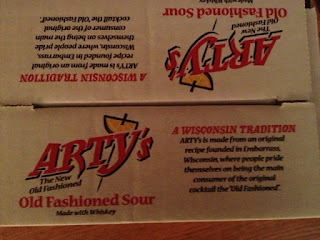 During a jaunt at a gas station in the Greenville area, I noticed Arty's on the shelves and I decided that as an Old Fashioned connoisseur it was necessary for me to purchase. For $8.99 each, I got a 6 pack of the Old Fashioned Sweet with Brandy and the Old Fashioned Sour with Whiskey. Each bottle makes one 7oz drink, making it $1.50 a drink before tax and no tip. I can get behind that. FYI, the bottle reads a 6.9% alcohol/volume and some distributors sell it for $7.99, dropping it to $1.33/drink. I tried the whiskey sour version first. I found my bottle cap opener and my heavy-bottomed old fashioned glass. I filled it with ice and poured the contents of the bottle on top. I snapped a few pictures as the drink cooled, as I had not refrigerated it prior. 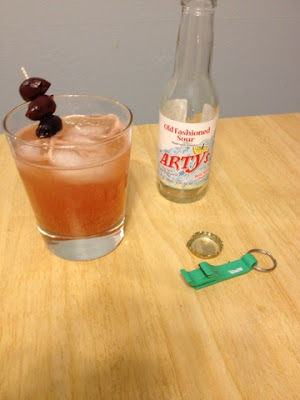 I took a sip and my first reaction was “hmm! Mmm!.” It tastes like Christmas, the mix must be similar to the one we used growing up. The bitters were definitely present, which is my favorite part. The drink was light, but sweet, even though I was tasting the sour variety. The citrus was also very pleasant and noticeable. There was a slightly weird after taste, but it could have been the whiskey as I am used to drinking brandy with my old fashioned. The only time I drink whiskey is with 7&7s. 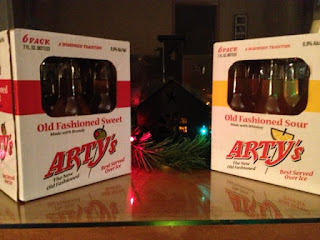 Overall, the Arty’s Old Fashioned Sour was better than a mix you find in a bar with flat soda. This was lighter, fizzy and tasty. Not syrupy and overly sugary like some bar mixes or even the mixes you buy in the store. I would highly recommend this as a gift to your out-of-state relatives and friends. I actually have gave one away to a friend in Minnesota and have one lined up for a relative in Michigan. My Minnesotan friend squealed with delight.