What a hectic year — if you aren't one of the lucky ones who know me in person, I apologize for the lack of posts. As I mentioned in a previous post, I broke my foot at the beginning of the year, then we put our house up for sale, then sold it and moved to a duplex, AND THEN we moved again to the outskirts of Hortonville area.

Besides that, in my opinion, summer just isn't a brandy old fashioned time of year. But with the weather finally turning, I hope to bring you lots more posts (and especially being in a new area!) 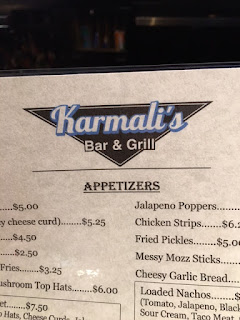 So let's get down to it. This one has been in the chamber for awhile. As I set the scene, it was EAA weekend. So awhile ago. But if you are someone who lives in the Oshkosh area, you know that during EAA, you really need to dig deep to find a place that's still in Oshkosh and doesn't have a 2-hour wait or a limited menu. So we dug deep and checked out Karmali's Bar and Grill.

Karmali's used to be George's Gaslight Inn. My old neighbor would have called it an Oshkosh institution. Sure enough, when we arrived, the place was not packed and did not have a limited menu.

From my recollection of George's, not too much had changed in Karmali's. A few minor decor changes, including an updated back bar, but nothing of great note. 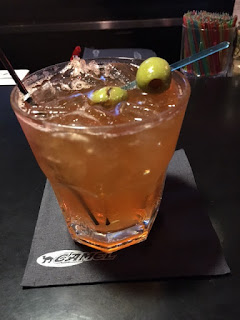 Well....... this bartender (who I believe is the new owner), has seen several seasons of Bar Rescue with Jon Taffer. The pours of alcohol were precise, if not a bit under. I didn't see the brandy used. The rest of the drink was just bitters, ice and soda with a garnish of olives. I don't recall the price, but I do remember it being reasonable (probably around the $3.75-4 range).

The biggest thing I noted was that the drinks were subpar for the expectations that a Wisconsinite has upon entering a bar located in a neighborhood and just off the beaten path. HOWEVER, with that said, I would go back. Why? Oh... the messy mozz sticks is seriously where it's at. We're talking hand breaded delightful logs of mozzarella, covered in a home-made tomato sauce (with just enough spice) and a yellow cheese sprinkled on top and then baked.

We also had their nachos, they were above average, for a bar, definitely a home-made feel on the nachos as well.

So we'll see how they do. The two appetizers we had were so good, but the lightly poured cocktails are meh.