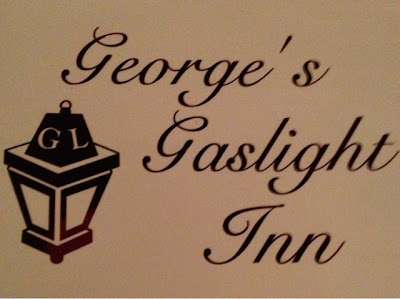 George’s Gaslight Inn is hidden in north Oshkosh down some side streets and stuck between a quiet neighborhood and old industrial buildings. A friend and I headed over there late Friday night for drinks and dinner. The parking lot is dimly lit and with a cold winter breeze at hand, we hurried inside.

Inside of George's isn't much brighter. It has an old school, gangster supper club feel. There is jail-style bars separating parts of the bar from tables. It is definitely a 70's motif. We took a spot at the bar and ordered. My friend, a connoisseur of bloodies ordered one of those and myself, I ordered the usual. Brandy old fashioned sour. The highball was filled with ice, followed by 2 shots of Christian Brothers, 2 dashes of bitters, several squirts of soda and then olives. The drink was good, light, but nothing special about it. It was an average drink worthy of a 3 olive rating. But the story doesn't end there.

I inquired the bartender about the price of the drink, as I paid for the first round and wanted to be able to report back the exact price. It was $4 and he noted that I was typing this on my iphone. "Are you posting this on Facebook?" the bartender intrepidly asked. I explained to him what I was up to and he nodded. I couldn't exactly read his feelings on this, but my friend and I continued to immerse ourselves in conversation.

Moments later, the Jesse Williams look-a-like (think Dr. Jackson Avery via Grey's Anatomy), came back and began to defend the bar--something to admire. "Jesse" explained that 90% of George's patrons are regulars and prefer their old fashioneds not muddled. Later my friend commented -- "probably because they are alcoholics and they can't wait". But who am I to judge? Anyways, the conversation shifted to good places in town (and not so good places) to order an old fashioned at.

When I finished my drink, "Jesse" the bartender insisted on letting him make me a muddled old fashioned and I couldn't resist, so I let him. One packet of sugar (2 if I had ordered sweet, he later told me), an orange slice with rind, a cherry and 3 dashes of bitters were vigorously muddled. Then two shots of Christian Brothers, ice and soda were added together. No garnish, but I didn't remind him for it. 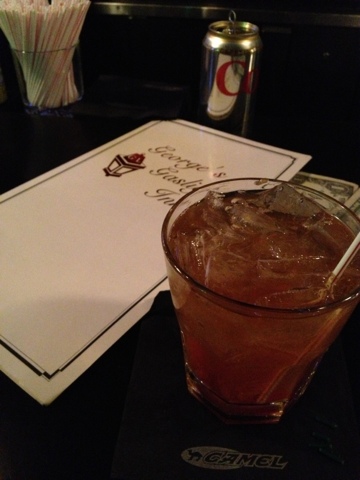 This drink was aromatic the moment it was placed in front of me. It was strong. I should have asked, but I think soda water was used instead of a sour soda.. which I didn't mind; however, then this drink would be an old fashioned pressed with brandy. The drink had great flavor, a heavy hand on the brandy and lots of depth. I would rate it 5 olives.

However, with that said. George's has a weird supper club ambiance, while "Jesse" was quite friendly, it wasn't warm and welcoming. The price was fair for the 2 shots of liquor, but the food was mediocre. Plus, the decor is hard to digest. With that said, I am going with a not-so-confident low-4 olive rating, but be sure to request your brandy old fashioned muddled.