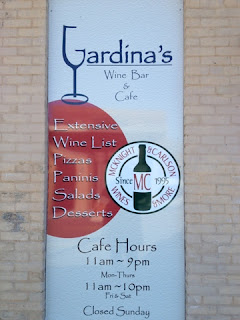 I have a soft spot for Gardina's Winebar-Cafe. I always have good food, good wine and good conversation with friends at this place. My husband avoids it like the plague, as he doesn’t drink wine and he doesn’t appreciate artisan food and claims to “still be hungry” after the meal. Fair enough.

For a while, I have been curious as to whether or not Gardina's would make a good old fashioned. Obviously, they specialize in wine (and now craft beers), but their bar is so pretty and I was hopeful. I arrived in the middle of the week and was meeting up with some girl friends. I got there early, to make sure I could provide a proper review of the drink. I sat at the end of the bar and placed my order, a brandy old fashioned sour…with olives.

I was optimistic when the bartender grabbed an orange and sliced off a piece. He added it to a glass, with a maraschino cherry, 3 dashes of bitters and began to muddle the ingredients. I noted that there was no sugar added. He then added ice and a shot and half of Korbel. Yum. I was getting excited. But, then it went downhill when the bartender opened the cooler and pulled out a bottle of sour mix. I cringed as he liberally added it to the drink. He stopped it off with a splash of soda. 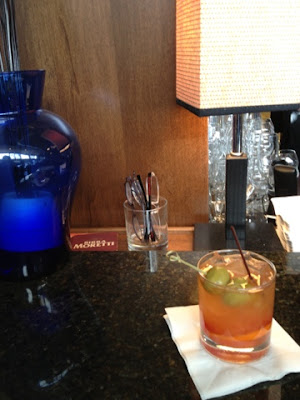 The drink was very tart, presumably from the sour mix, which overpowered the bitters, the fruit and even the Korbel. The drink was heavy and tasted like a good brandy sour—but not close to what I ordered. There is a definite line between a brandy sour and brandy old fashioned. A line that shouldn’t be crossed. I think this drink would have been pretty good, if the sour mix had been omitted. 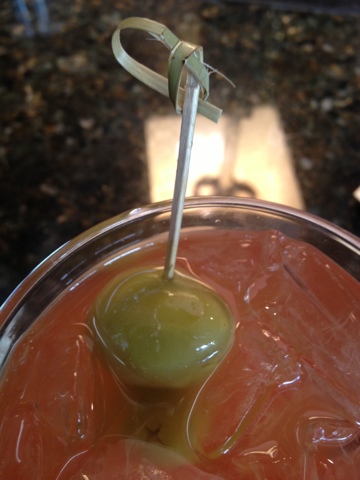 On a positive note, the olives were AWESOME. They were huge, crisp and super yummy. They helped bring out the Korbel flavor in the drink. And back to the negatives, and also weirdly enough, the drink was $5.20. I assume the 20 cents was tax.

The drink really is only worth a 1 olive rating, but I love Gardina's huge windows, bright space, tall ceilings and large bar. I can also appreciate that the drink was made with Korbel, for that price. However, avoid the old fashioned and order a nice bottle of wine.