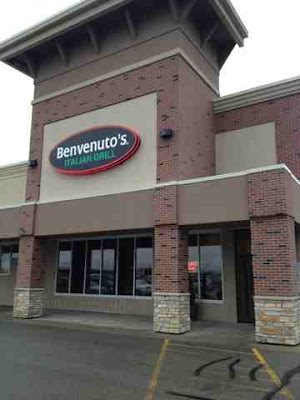 I’ve been to Benvenuto's more times than I can count. They have great Italian food, an awesome atmosphere and their general vicinity to the movie theater makes it an optimal date location. I typically stick with the Prosecco when partaking in their alcoholic beverages, but an Old Fashioned review was in order.

I bellied up to the bar and ordered the usual brandy old fashioned sour, to a bartender that I was not familiar with. She was pleasant, but not one of their usuals that I have come to recognize. She grabbed an unmarked container and added a mix to the glass, followed by two shots of Mr. Boston 5 Star Brandy, ice and soda. She inquired if I wanted a garnish, as I forgot to specify and she added two olives to the drink. 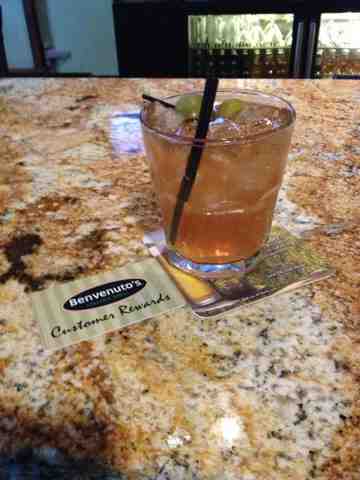 I inquired about the mix they used. She seemed a little bit intimidated by the question, as I already asked about the brand of brandy she was using—I have never heard of Mr. Boston 5 Star Brandy. (Note: This brandy was hardly deserving of 5 stars, let alone 1!). She said that they make their own mix in house and she wasn’t quite sure what was all in It besides simple syrup and orange bitters).

The drink was $4.75 and not worth it. It was so light that it tasted almost watery. A friend of mine noted it was probably a result of the less-than-mediocre brandy used. There were no aromatics and not much flavor. With that said, the two shots of alcohol did hit me and I’ve tasted worse. Also, the olives were big, juicy and salty. Some of the best available. Overall, the drink is only worth 2 olives on my scale. So go to Benvenuto’s for the Italian nachos and Prosecco. Avoid the old fashioneds.