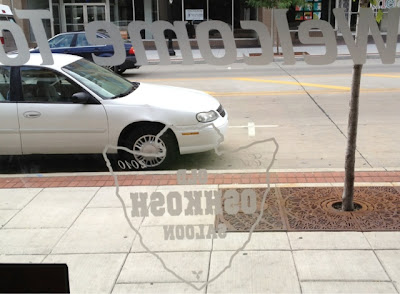 My trip into the Old Oshkosh Saloon for a brand old fashioned sour was a quick one. I was running late and some ladies and I were only going to have one before heading to Waterfest to volunteer and I almost didn't make it. I am glad I did, as I have heard rumors that Old Oshkosh Saloon will be renamed back to Screwballs...?? 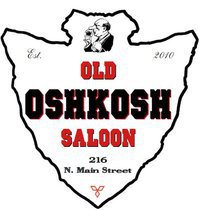 Anyways, the bar was busier than I expected for 4:45pm on a Thursday afternoon. I ordered my drink and watched carefully as the Lions fan bartender (my husband is a Lions fan....) made my drink. The pint glass was filled with three-quarters of ice. Then the Aristocrat brandy was added half way, followed by several dashes of bitters (5-7). He then filled the remainder of the glass with Jero Old Fashioned mix and added a small splash of soda on top. The drink was garnished with three olives. 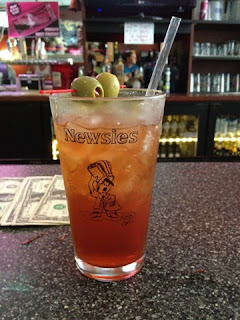 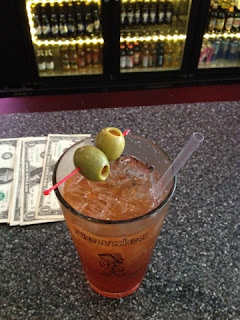 I keep forgetting to take a picture before I taste!

Just thinking about this drink hurts my teeth, it was so sweet! I had high hopes for this drink, despite the use of a pre-mix, since I really do love the bitters and they used a lot. However, the sweetness of the mix over powered everything else in the glass. There was a good amount of brandy in this drink and I couldn't taste it at all.  My rating isn't just dependent on the drink, the atmosphere of Old Oshkosh Saloon was super friendly. I enjoyed chatting with the other older gentlemen at the bar.  The barkeeps were very friendly and gave us Buy1, Get1 coupons for after Waterfest. The bar itself was clean, bright and had new TVs showing pregame football. Also, the drink was very reasonably priced at $3.