It was serendipitous that Facebook suggested I attend this event, despite not being a friend of Calhoun BeachClub (side note: It pains me when a business has a friend page, MAKE IT A BUSINESS PAGE).

Aside from putting together a menu of ten Old Fashioned favorites at CBC, we'll be starting a Punch Card program that will give you your favorite CBC Old Fashioned FREE when you get ten punches on your card.


First off, why didn't anyone tell me that CBC was so known for their old fashioneds? Secondly, did you say a menu of 10 different old fashioned recipes? I AM THERE.


And so I was. I arrived around 8 p.m., despite the event offically starting at 8:30. There were only five people in the bar, including the bartender. I hadn't been to CBC other than during a pub crawl. The place was a lot bigger than I remembered, and MUCH cleaner. In fact, I was really impressed at how clean this Main Street bar was. It didn't reek like cigarettes or b.o. The floors were shiny, the tables and bars were pristine and not sticky. I really loved the cozy vibe.

I told the bartender that I was there for the Old Fashioned kick off party and asked to see the menu they advertised. I quickly glanced over it, as I figured I would order the usual and study the other options later. 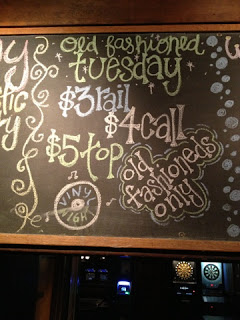 I noticed the specials, $3 rail, $4 call and $5 top shelf old fashioneds on Tuesdays starting at 8p.m. Their typical buy one, get one happy hour ended at 8 p.m. and this was the nightly special. The bartender informed me that their rail brandy was Mister Boston, they didn't have a call brandy (but call whiskey was Kesslers or Jack) and Korbel was the top shelf.

I requested the Korbel brandy after really wanting it in my last drink at The Vintage. In the rustle of things, I never noted that I was requesting a brandy old fashioned sour. Instead what I got was 1 cherry, an orange slice, a sugar cube and 3-4 dashes of bitters lightly muddled and grinder in a glass. Followed by ice, 1 shot of Korbel, a lot of soda and 2 olives. 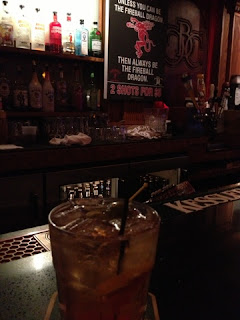 I immediately noticed the lack of muddling during the drink preparation. Of course, I also noticed the single shot and lack of bitters. It was noticeable in the drink. Also noticeable was the soda, I asked and she had used Sierra Mist. I later realized that she had made me a Grandpa Joe- Korbel Brandy and Sweet, with olives - $6. I paid $5 during happy hour. 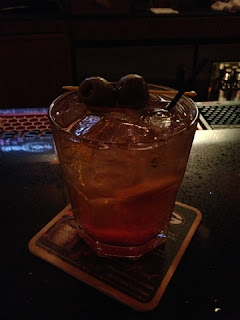 The super sweet, nice bartender was young. I think she was a bit hesitant to muddle the shit out of the drink. If there was more muddling, I would have gotten a better aroma and more flavor. It wasn't as sweet as one would expect with the sugar cube and sweet soda, but it was satisfying. The drink got better and better as it got to the bottom of the glass, despite my efforts to vigorously mix the drink when I received it. 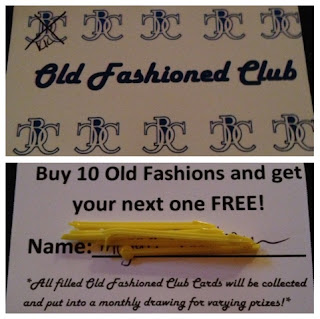 I was also given a punch card. Drink 10 old fashioneds, get the 11th free and a possibility of winning a prize. Score! 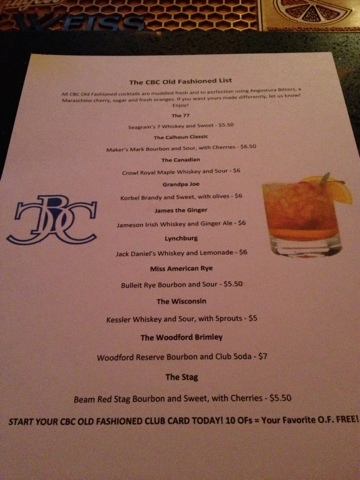 The drink menu promised that the old fashioneds would be "muddled fresh and to perfection using Angostura Bitters, Maraschino cherry, sugar and fresh oranges." Over all, it was a very good brandy old fashioned, especially for a bar (verse supper club). With more muddling and a heavier pour of the Korbel, this would have been 5 olives. The price was a bit daunting, even for a special, especially with only one shot. However, I hope to revisit and see if a more experienced bartender would have crafted this drink to perfection.

CBC will be the first on my mind if a friend wants to meet at a bar for a drink.