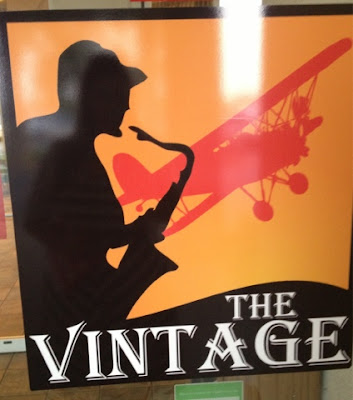 I’ve been to The Vintage a handful of times and enjoyed every meal. Sure, it is pricey, but the entire experience is worth the cost. At my last visit, a friend even commented how weird it is to walk into the Hawthorne hotel, with the lobby that smells like chlorine, the TV set on sports and the shabby carpet that is so lumpy that you are afraid you will trip on it. Then, moments later, you push the glass doors into The Vintage and you are transported to a nice, boutique restaurant, "upscale-for-Oshkosh".

Trying The Vintage’s old fashioned cocktail has been on the list, but every time I end up getting a bottle (or 2) of a really great wine. This time, I was on a mission. I arrived at The Vintage just before my dates arrived, and bellied up to the bar. Just like the restaurant, the bar is small and quaint, but with a large selection of top shelf liquors. I very much enjoyed their bar stools--which were tall, wide leather chairs.

The couple who arrived at the same time as myself ordered first. The gentleman ordered a whiskey old fashioned and asked if they had mushrooms or Brussels sprouts, the bartender regretfully informed him that they had neither, so he settled for olives. He also asked what whiskey she would be using and she responded, Fleischmann's… ack, bad sign. He ended up choosing Crown Royal (I believe, I didn’t write it down) and I am not sure what the up charge was.

I watched carefully as she mixed together the gentleman’s drink and then again when she mixed up mine, the brandy old fashioned sour (I did not specify brand nor garnishment). Both times she made the drinks exactly the same, except for the liquor. She grabbed a highball glass and added 2 maraschino cherries, a large slice of orange (rind intact) and added 4-5 dashes of bitters. She was heavy handed on the bitters, which I did not complain. She then opened a packet of sugar and added that to the glass. She vigorously muddled the ingredients with a wooden pestle. She took a fair amount of time grinding and swirling the concoction together. Afterwards, she added ice, a solid 2 shots of Aristocrat brandy and a splash of soda.

She asked if I wanted a garnish, when I said olives, I was asked “regular or blue cheese?” It took me a second to process the second question, but I definitely wanted the stinky cheese. They were standard size olives, lightly stuffed. They appeared to have been prepared onsite. It was a nice touch and quite tasty. 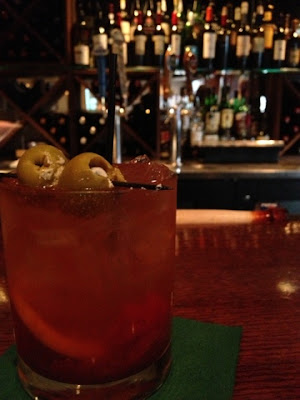 The drink had great depth and I love the extra bitters. It was light, but flavorful and not at all sugary. My friends showed up just as I received my drink and one of them tried it. She mentioned how bitter and sour it was, she had only previously had old fashioned sweets. I enjoy when there is a solid difference between the old fashioned sweet and the old fashioned sour. There should be!

I do have some complaints. I know this is a personal preference, but the packet of sugar is tacky. I am not going to knock them down in the rating, because it is a logical form of measurement. It prevents a heavy hand from ruining a drink with a shaker of sugar. However, they could easily use a bar spoon to achieve the same results and look a lot more professional in such an “upscale-for-Oshkosh” restaurant. Also, at $5 a drink, can a girl get some Korbel? Either lower your prices when you use the cheapest rails known to man or hell, being a “upscale-for-Oshkosh”, don’t use rail liquor for a named, and somewhat signature, drink!

If your at The Vintage, go with the horseradish and parmesan encrusted salmon, it makes my mouth water just thinking about it. Order a brandy old fashioned sour, but know you are going to get a 5-star drink, with a no star liquor, unless you call the brand. Close, but no cigar.