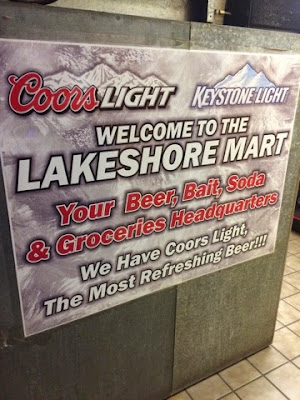 A Journey to Van Dyne Episode 1

I’ve lived in Wisconsin my entire life and have experienced many usual drinking establishments—but a bar in a gas station was never one of them, until a week ago. Yes folks, Wisconsin indeed has at least one bar attached to a gas station. Swarm/Foursquare lead me to believe that this tavern was called The Gas Hole—however, all signage referred to this place as Lakeshore Mart. Be that as it may, if you are travelling on Hwy 45 looking for Lakeshore Mart, it can be found across the street from Wendt’s On the Lake at the Citgo gas station.

I entered the Citgo and as I went through the doorway it was as if I was teleported into someone’s basement. The hand-crafted bar had amazing wood shelving. There were three HD TV’s on a cable station and a couple of standalone high-top tables. My husband guessed the bar area was no larger than 20 feet by 15 feet. It was cozy and packed full of friendly patrons. 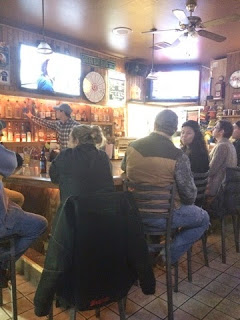 Attached to the bar was a giant closed-in patio, which also had a TV as well as several picnic tables. It smelled of smoke.

I ordered a Captain & Coke for the husband and a brandy old fashioned for myself. The bartender immediately asked “Tall…?” “Sure,” I immediately responded. “Sweet or sour?” “Sour,” I repeated. I know I asked that the first time around, but the bar was a bit loud for the small space—but only during commercials. Like I said, it was like being at a friend’s house to watch a particular show. Anyways, the bartender grabbed a pint glass, added ice, then poured Artistocrat brandy about half way; it had to be close to three shots. Then he filled the glass until it was 3/4ths full with Jero Old Fashioned mix and then topped it off from a can of 50/50—yep, we are FOR SURE at a friend’s house. I was asked if I wanted a garnish and I replied, “Yes please, olives.” 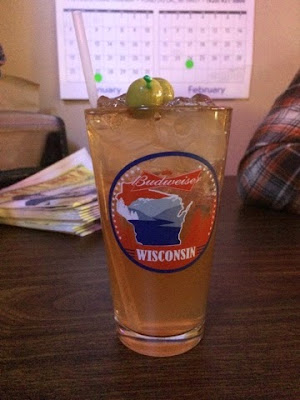 What can I say about the drink? It was tasty and what I would expect from a bar in a gas station. The total price for our drinks was $7.75, with one being $3.50 and the other being $4.25. I didn’t ask which was which—you don’t ask those questions at a friend’s house.

Lakeshore Mart had a wide range of reasonably-priced food options listed on a sign on their wall; however, I didn’t notice anyone eating anything. The bar fit about 10-14 people at it and every seat was taken, as well as a couple of people standing around and couple of people sitting at the high-top tables. It was a fun atmosphere. Check out their Facebook page—it looks like they do fun games for happy hour during Packers games and at other times! I really enjoyed coming to this bar and would definitely make the trip back sometime, but I wouldn’t order an old fashioned.